It has seemed that uncertainty is in the wind at HM.  I'm waiting to see if and when #318 will exist, if they can at least match the 10 issues produced in 2021, which I considered not too bad for the ambitious promise of a return to monthly publication.  I've gotten 5 in the seven months of 2022.

They seemed to have pumped up their appearance at SDCC this year, from what I could see on their twtr and fbook (cuz that's about as close as I'll get to a convention), and they released a promo video for stuff being developed, that included some bits of a live action Taarna character, in an otherwise digital set.  The video link is in this article about HM at SDCC:

However, the comments on the video call out that the non-Taarna bits, promoting their other developments, are grabbed from other movies, which clueless me would not have noticed.  So that doesn't look good, using others' stuff to promote one's own properties, as if they don't really have much on their own stuff to show.

(also I can barely stomach the spewage in the press release in the article, buzzwords all over the place, and I'm already sick of "buckle the fuck up".)

A live-actor Taarna movie could be cool, maybe, and I'm somehow reassured that her costume is somewhat more sensible, or at least more practical, than Taarna's outfit in the 1981 movie.  A promo shot from fbook: 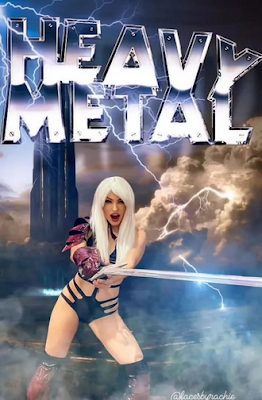 Snap from the video:

But it would probably be digitized over like most everything else.

I am also amused by the idea of a live-actor Taarna, in that a live actor was used for some of the animation work in the 1981 movie, per an article in the August 1981 issue: 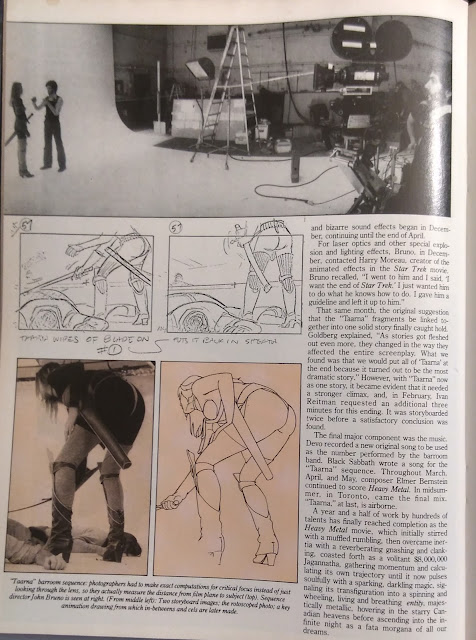 That's about it for what I would look forward to, from the promo.  The other things (noted by the titles over the scenes from other movies) are for some of the new things they've been promoting, Adrienne James, Swamp God, Savage Circus, etc, which have not interested me.  Overall this promo video isn't encouraging.

Also recently, the HM website shows up as "Metal+" on the front, with tabs for various things digital, talking up "web3" and enefftees and crap, and also a tab for "Physical Goods".  That's mostly books and things along with the mag, and a merch section with nothing in it yet, but for the Hildebrandt calendars.  This attempted rebranding is likewise discouraging, shunting the magazine to the sidelines, and is reinforced by the article noted above, where blather is expended on it.

And there's a really stupid typo referring to Taarna as the "Last Taarakin".

Also again, right after the SDCC and its breathless announcements and panels, HM's fbook got hacked.  It would be amusing if it wasn't so dismaying.  Their operation seems to be teetering.  It's plagued by customers so furious about unfilled orders that I've heard rumors of a class action suit.  Their publishing schedule is inconsistent.  They went in with both feet on enefftees, and don't seem to be letting up stepping in it.  Their tumblr hasn't been updated in months.  I have small hope and smaller confidence that they'll be able to keep the magazine going.  Like I've said before, if they go all digital they'll lose me.  And I'm pretty sure they don't care.

While I have no sympathies for the Big Shots, whose machinations and hubris burden the operation with extraneous crap and have put it in this position, I'll feel a bit sorry for artists and creators, and the hapless staff trying to do their jobs, and fans of the mag like me (and not like me), who can only watch as Heavy Metal Magazine appears to crumble from the inside.  Will someone come in and save it again, like Kevin Eastman did 30 years ago?  Small hope is all I have.  Enjoy what you can, while you can kids, nothing lasts forever in this world.

fred
got a review to share? something HM related? leave a comment or email me at fredhm1977@gmail.com. background image from October 1978 issue. I'm just some old guy that likes HM magazine. I saw the first issue in school, and started buying them from the second. I lost interest in the mid-80s after the first movie. I got interested again about 05 and have collected and read them all. I wrote a bunch of these reviews for the departed HM web site forums, and only put up this blog when that forum was closed in 11. I'm doing this for my own amusement, but if you want to join in you're welcome.